Christian Clot has been exploring for 20 years and now he’s travelling around the world in the service of science. His specialty? Expeditions in hostile environments. In 2016, he starts a new adventure called Adaptation—4x30 days. His aim is to successively cross the four most extreme environments in the world in order to better study the adaptive capacities of the human body. It’s with great pleasure that we participate in this adventure by providing him the best sun protection for his eyes. We took advantage of his return from Patagonia, Argentina to meet him and interview him.

Hello, Christian, for those who don’t know you, could you please introduce yourself?

I’m Christian Clot, I’m 44-years-old and for 20 years, I’ve been leading expeditions in different places of the world always with scientific questioning as the focus. It could be geographical or physical, for example in glaciology or oriented around human questions such as ethnology or anthropology. During the last 10 years, I devoted all my expeditions to research and the understanding of the human body’s adaptation in hostile environments.

Before starting a new expedition, do you follow a special preparation or routine in order to adapt to your future habitats?

Yes, I must prepare myself carefully. In fact, wanting to be an explorer is one thing, but becoming one is another. In terms of physical preparation, I’ve always spent a lot of time in the mountains so I was pretty much ready on that front. I then, had to go into all other environments such as desert, mountains, forests or sea to learn about them. I tried to understand how extreme they could be. Regarding theoretical knowledge, I had to relearn many of the studies that I had not paid much attention to at school in my youth (laugh). I followed languages, geography and physical classes. Then I must complete them with specific knowledge in neuroscience and physiology, which are essential for my expeditions. 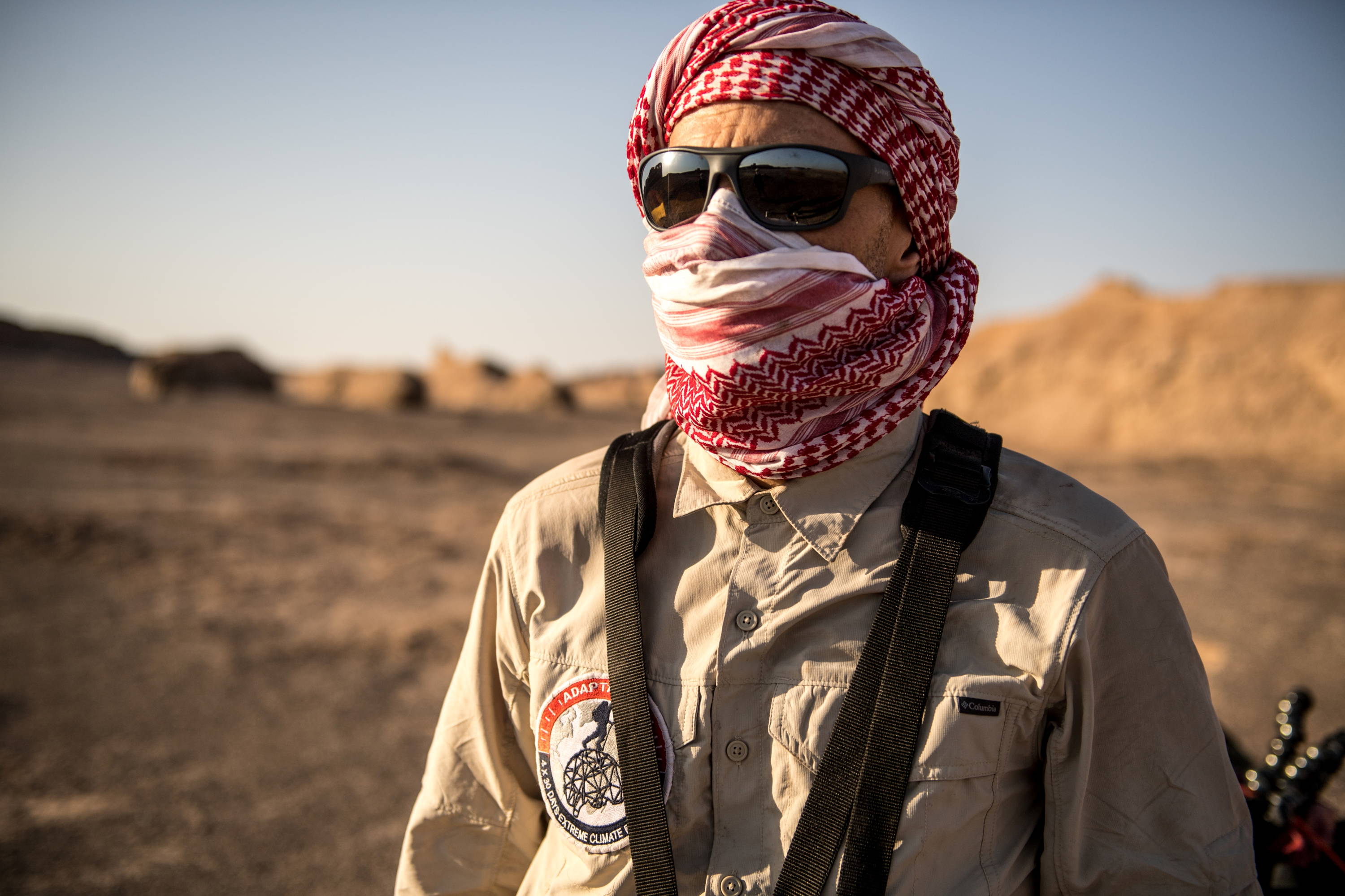 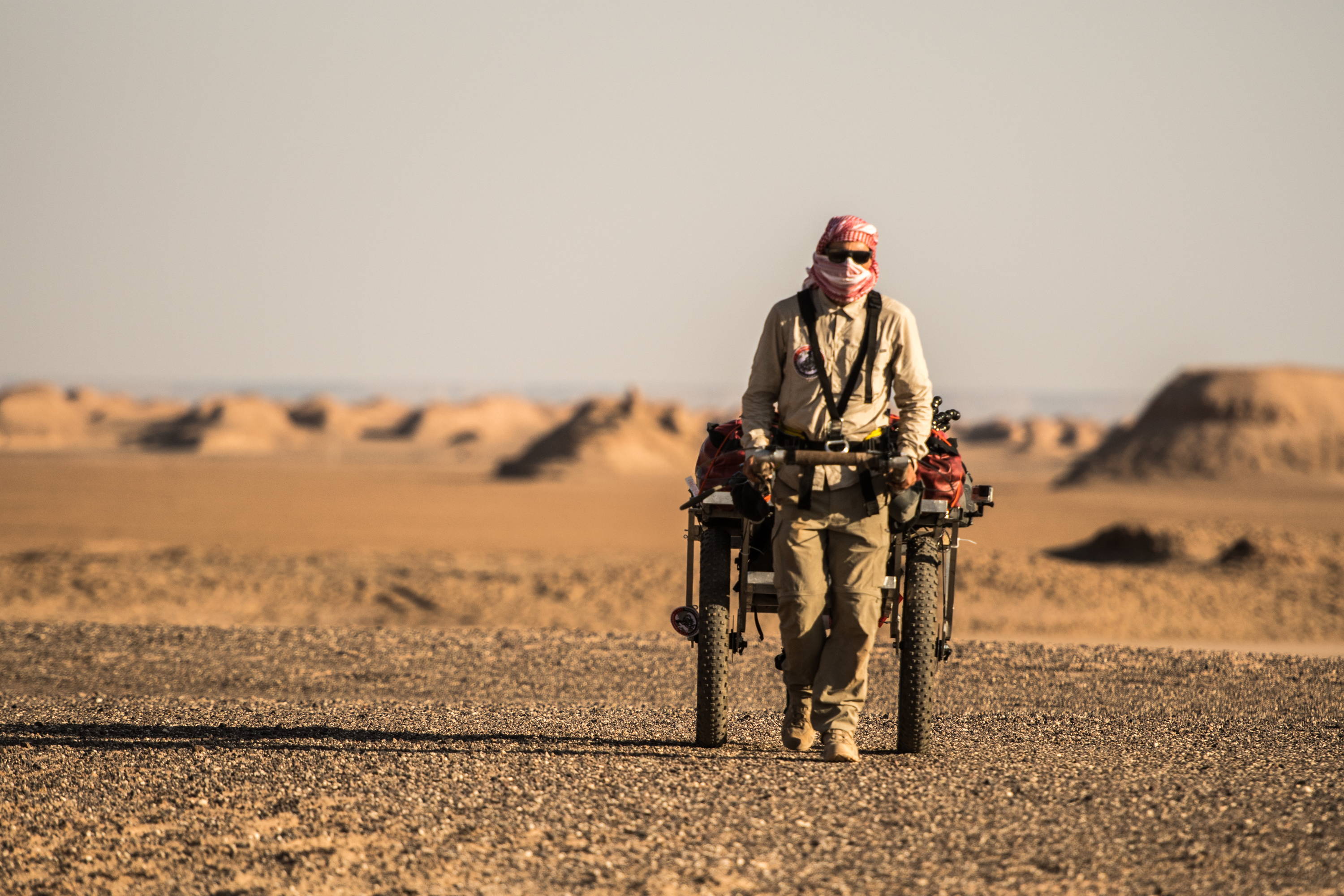 So recently, you started a new solo adventure called Adaptation 4X30 days, can you explain to us what it is?

For a decade now, I’m working around the humans’ resistance in a crisis situation. During a long time, I studied the psychological aspect, but I missed a fundamental approach which is how the human brain is able to face these situations. In 2014, I decided to launch this expedition to carry out new research. The aim is to understand how the cognitive system will adapt to extreme situations, to study the transformation of the brain and the human body in its difficult moments. So I imagined this expedition which aims to go in the four most extreme environments of the planet. The principle is to stay each time for 30 days to have time to observe evolution in the behavior of the body and the mind.

And if I not mistaken, you follow an itinerary?

That is true and there are two main reasons. First, if I stayed in a place, I could create a camp that would allow me to “live better” and that’s not exactly what we’re looking for. By moving, I’m must always question myself. Then the second reason is that the scientists I’m working with and myself, we agreed that the notion of motivation is fundamental to adapt to a new situation. You should find a reason to adapt in a new situation and have a purpose. A journey is a great source of motivation.

Your first expedition was in Dash-e-lut, the Iranian Desert with temperatures around 60 °C (140 °F), can you tell us about it?

From a scientific point of view, it’s a bit early to draw conclusions, because we need to conduct long-term analysis. We also need comparisons, so we need data that I will get in other environments. But that being said, what is interesting in a place like the Dash-e-lut, a desert that is relatively flat and steady, is that there are very precise variations during a day: a little freshness in the morning, an extreme rise in temperature during the day and then a lull in the evening with relatively cool nights, around 25 ° C. This allows the human to have a relatively fast adaptation because it can set objectives to short term. If you’re feeling really bad for a certain time especially in the middle of days, you know that it will stop in few hours, so you can project yourself. In an environment like Patagonia where everything is always changing, you can’t project yourself in the same way and it’s far more difficult to adapt.

You were interrupted after 20 days by the Iranian secret services, I imagine your surprise when you saw them arrive?

Yes, the Dasht-e-lut is located on the Iranian border with Pakistan and Afghanistan. It’s a very unstable region and when I was there, unfortunately there was a lot of Taliban activity in the area where I was. Some tried to cross Iran to go to Syria. For that, they wanted to cross the desert by Jeep and the Iranian authorities somewhat by chance intercepted me. I was obliged to interrupt the expedition for security reasons, in order to avoid a bad encounter.

" There were several violent storms with stone projections and once there was one that hit me in the face. The stone violently hit the glasses, but they did not break. They were slightly cracked, but it saved my eye, which is not so bad indeed! " 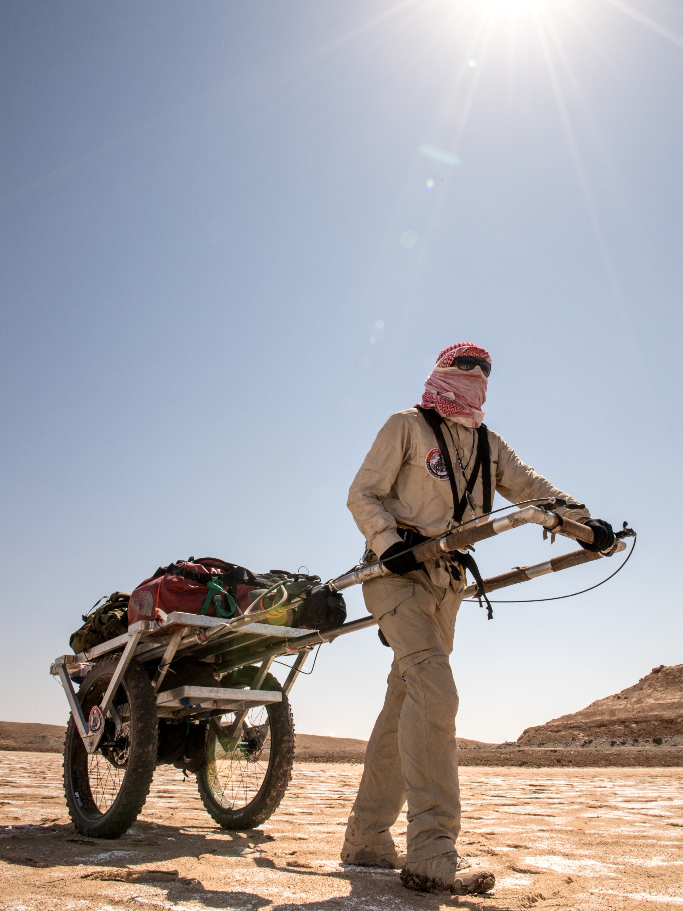 You just finished your second expedition in the heart of Patagonia in Argentina. It’s one of the few places where humidity is high and temperature negative, was it more difficult than Iran?

Indeed, this environment proved to be more complicated than the desert. If the extreme peaks are a bit less violent, there is this famous irregularity of the climate which is very difficult to manage especially in kayak. The conditions of navigation were very uncertain. I could leave in the morning in fairly calm weather and in a few minutes, very violent winds could rise. I had to try to adjust to those new conditions rather quickly and this is very difficult due the process of human adaptation. Especially for us, Westerners who have a strong tendency to always want to project themselves in the long term. There, it was necessary to relearn to accept that you are just one element among these disproportionate world and it demands us to operate at full capacity permanently.

So in your opinion, will this be the most challenging environment in which you are going to have to evolve?

I don’t know if it’s going to be the most challenging, but it’s the one that is cognitively the most exhausting. You must always be attentive and therefore always on the alert, where in other environments you can sometimes lower your guard a little bit. It will be interesting to compare with the Amazon. If the climate is relatively stable in this environment, we will have to face a much more hostile fauna and flora (native plant life), which can create some tension and will be interesting to the study.

What kind of data do you collect in the field? How do you obtain data?

There are three different types of data. There is objective data with devices that measure for example my cardiac activity, my physiological or cognitive activity. Then a second category of work that will be similar to questionnaires about how I live in the environment. How do I feel about it? Then there is a third type of data that will be physical terrain data, such as weather. By combining all this data and with the help of the various researchers and laboratories participating in the adventure, we will make correlations between all these elements.

Despite the difficulty of these expeditions, you cross amazing landscapes, do you have time to enjoy them? Is there a way to comfort yourself or does the struggle for survival leave no time to think about it?

On the contrary, it is here where all the strength of the extreme lies. As part of environment I cross, there is a lot of beauty and wonder. It’s also one of the forces of adaptation, when you’re finally able to be amazed again by our environment. At the beginning, most of the time, the violence of these environments and their impact creates a rather negative feeling, it is difficult to appreciate them. And one of the markers of adaptations is when we start looking at these environments for what they are. Gorgeous environments, absolutely uninhabited, a nature in the rough without any modification. 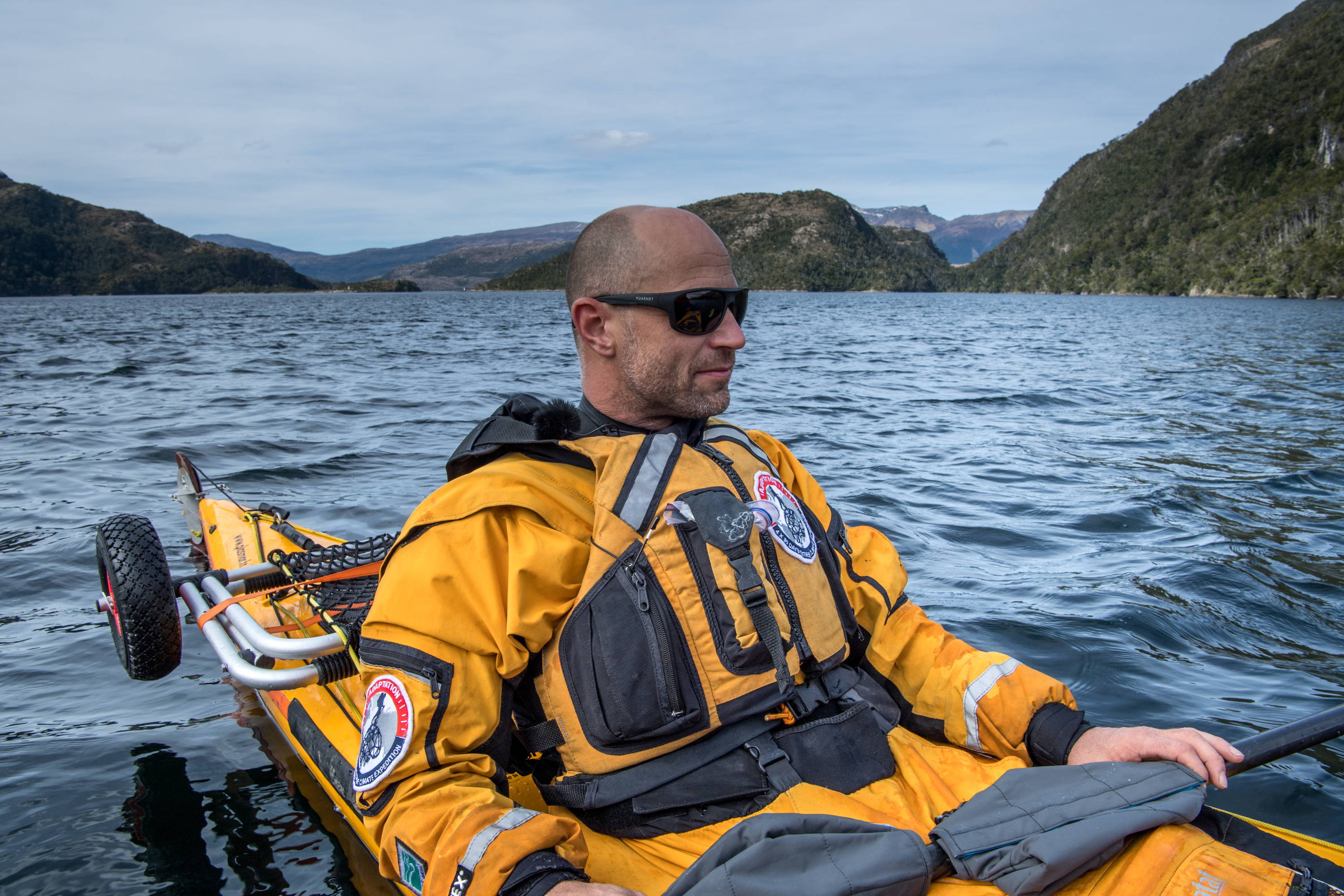 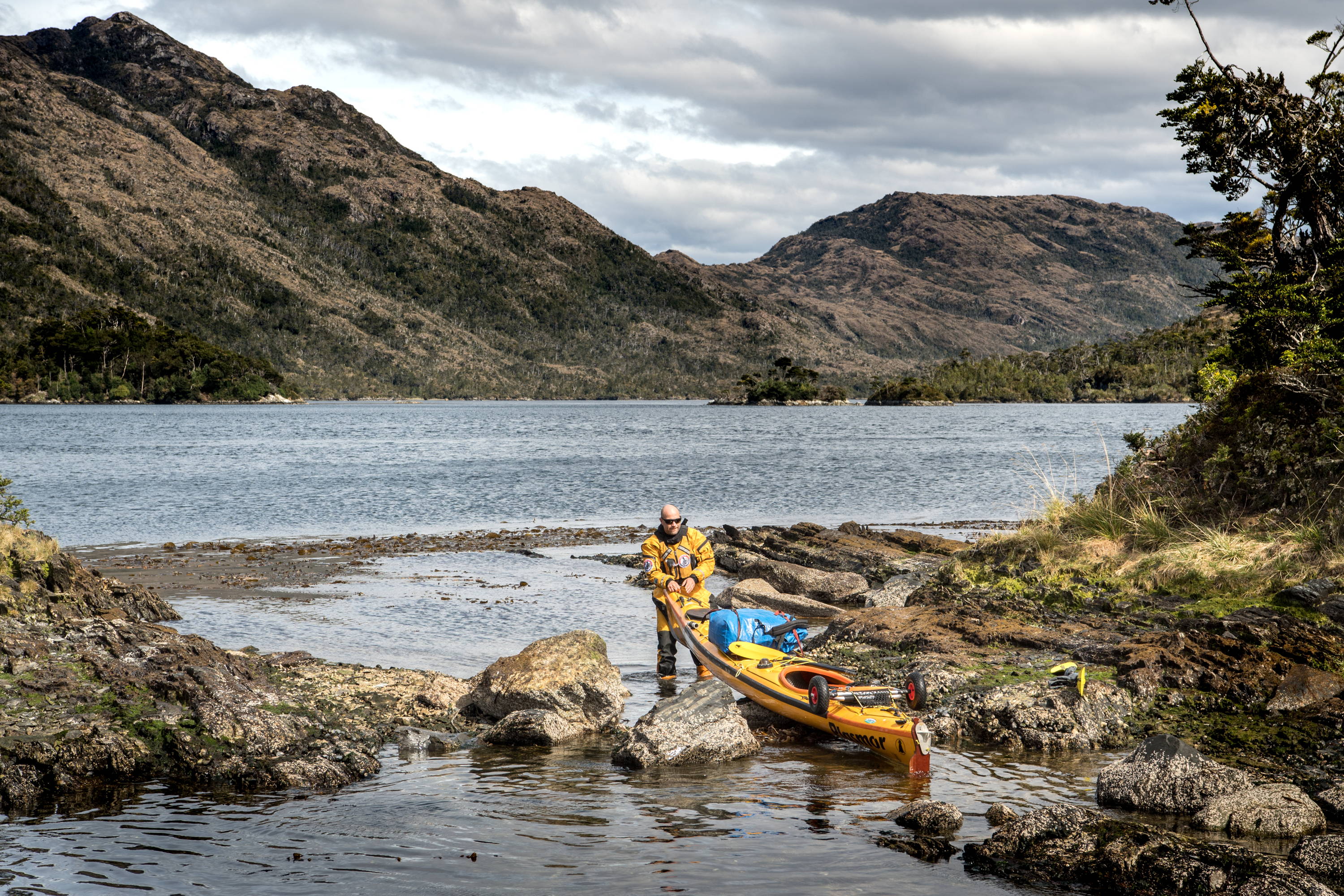 We are very proud that you have chosen Vuarnet to accompany you on these expeditions, what is your appreciation of our products? Did they withstand extreme temperatures?

I am very happy to be able to count on Vuarnet to accompany me. Your product and the material used, surprised me in a good way, especially in the desert. There were several violent storms with stone projections and once there was one that hit me in the face, at the level of the eyes. The stone violently hit the glasses, but they did not break. They were slightly cracked, but it saved my eye, which is not so bad indeed! I could also wear them when it was very hot, a very positive point. If I used them a bit less in Patagonia, there was nevertheless a sunny day. Every day, it turns out that these sunglasses were very pleasant and easy to wear, they are lightweight with good support.


Finally, can you please give us your vision of a Vuarnet Day?

There are so many. But it would potentially be at the top of a beautiful mountain that would overlook the rest of the massif. Ideally the Cordillera of the Andes where the landscapes are often very varied. Indeed, from the top of these mountains, one can see large plateaus, forests and various other environments. It gives the impression of being able to observe the whole world at a glance.

FREE DELIVERY AND FREE RETURNS
Free delivery on all orders over $100 within 5 to 7 business days and free returns within 14 days.

Sign up for our newsletter and you'll be automatically entered in our monthly giveaway. Win a pair of Vuarnet Sunglasses of your choice. Offer valid only in the US.

Thank you for subscribing.