Tara Expeditions in the Pacific Ocean

Since 2003, Tara Expedition crosses the oceans in favor of research and the environment. French initiative recognized as a public utility, this Foundation organizes expeditions to study and understand the impact of climate change and of the ecological crisis on our oceans. For this, the crew sails aboard a mythical boat, the TARA, designed in 1989 and built for extreme conditions. Since 2015, Vuarnet is committed in favor of this beautiful initiative as an official supplier. We offer the entire team pairs of sunglasses that guarantee the best protection for their eyes. Today we had the chance to ask some questions to Romain Troublé, general director of the association.

Hello Romain, we are thrilled to have news about the boat. For those who follow us, could you please quickly explain what is the foundation Tara shipments?

The Tara program was created in 2003 and became a Foundation in 2016. Today, it is the only French foundation recognized as a public utility, devoted to the ocean. At the Foundation, we promote an open and innovative ocean science that can predict, anticipate and prepare us for the future. It is both a great scientific and human adventure. We use this high-level scientific expertise to raise awareness and educate the young generations, mobilize policymakers and enable developing countries to access this new knowledge.

The Tara boat is an actual floating laboratory, since 2003 it has traveled nearly 400 000 kilometers, docking in more than 60 countries in 11 expeditions conducted in collaboration with laboratories and international organizations of excellence (CNRS, CEA, EMBL, PSL, MIT, NASA …).

The current expedition is devoted to the study of nearly 30 coral reefs in the Pacific Ocean. It began in May 2016 and will end with the return of the schooner to Lorient on October 27, 2018. Tara crosses more than 11-time zones across the largest ocean on the world, including from the most isolated reefs on the planet to the Chinese coasts where we are now. 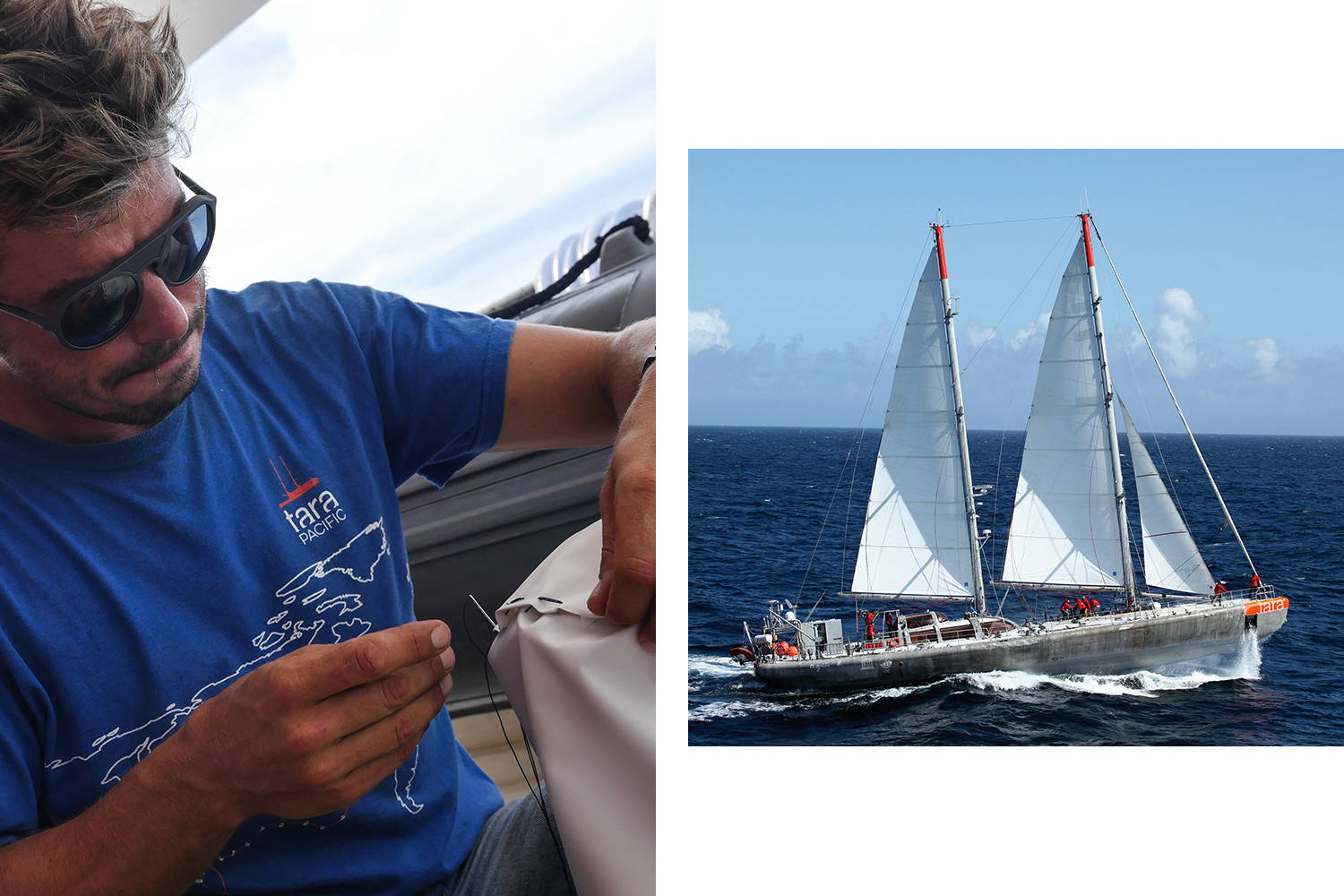 What are the leading stakes of this expedition?

The Tara Pacific expedition aims to study as nobody did before the biodiversity of coral reefs and their evolution due to the climate change and anthropic pressures.

Our scientific team studies the health status of reefs and their biodiversity at different levels and focuses on their adaptation and resilience of these ecosystems.

From an ecological point of view, why studying coral reefs is essential today?

Coral reefs cover less than 0.2% of the ocean but are home to almost 30% of the known marine biodiversity, and the Pacific Ocean alone concentrates more than 40% of the world’s coral reefs.


Their health is crucial for the different species they shelter but also for humans. For example, they provide a livelihood by fishing for about 500 million people around the world. Also, the value of the ecological services they provide like the protection of the coasts against the erosion or tourism is considerable.

Affected by global warming and the expansion of local human activity, many of these coral reefs have been damaged or disappeared in recent years in a very odd way. It is therefore urgent today to study this fragile and endangered ecosystem to better understand and preserve it tomorrow. 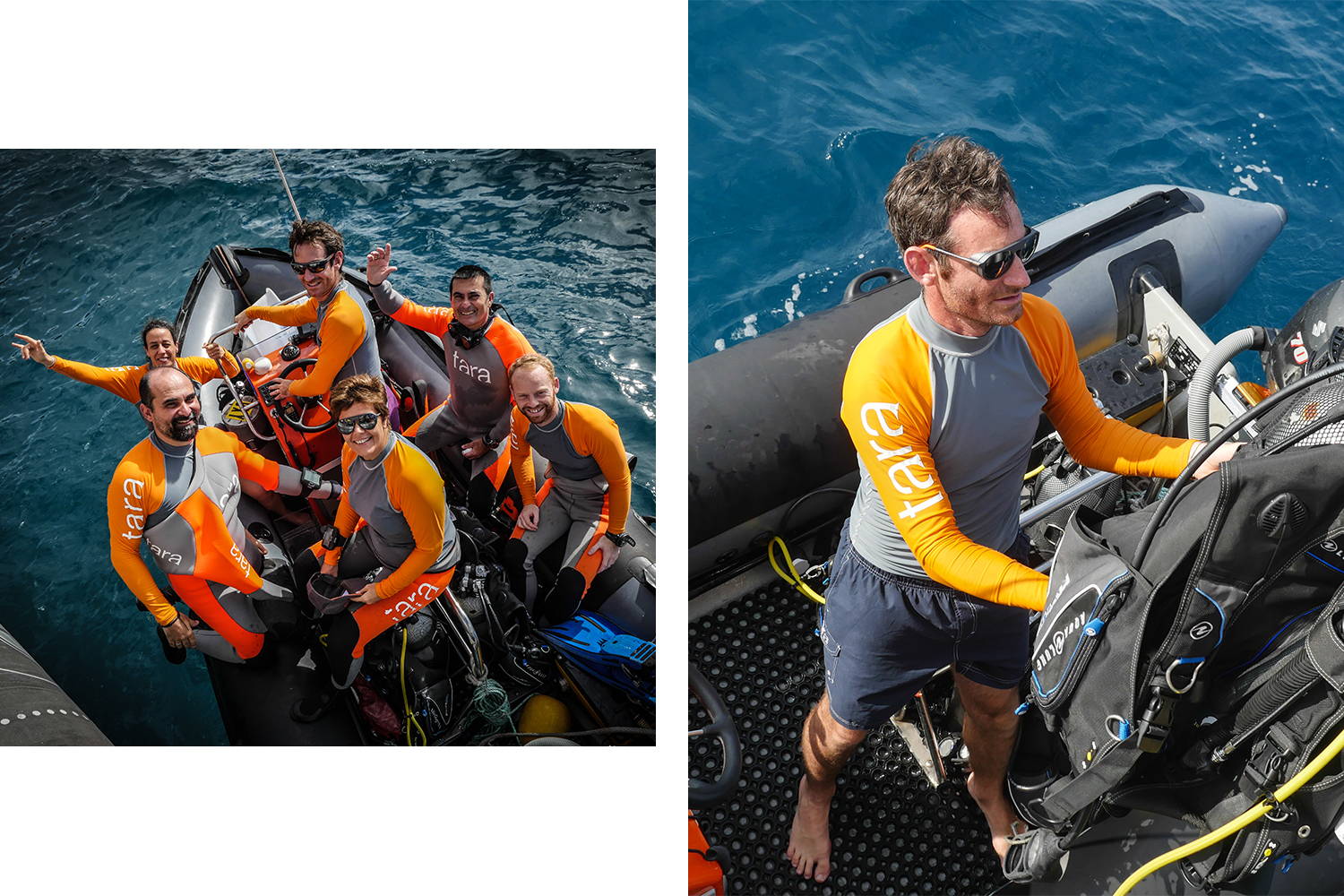 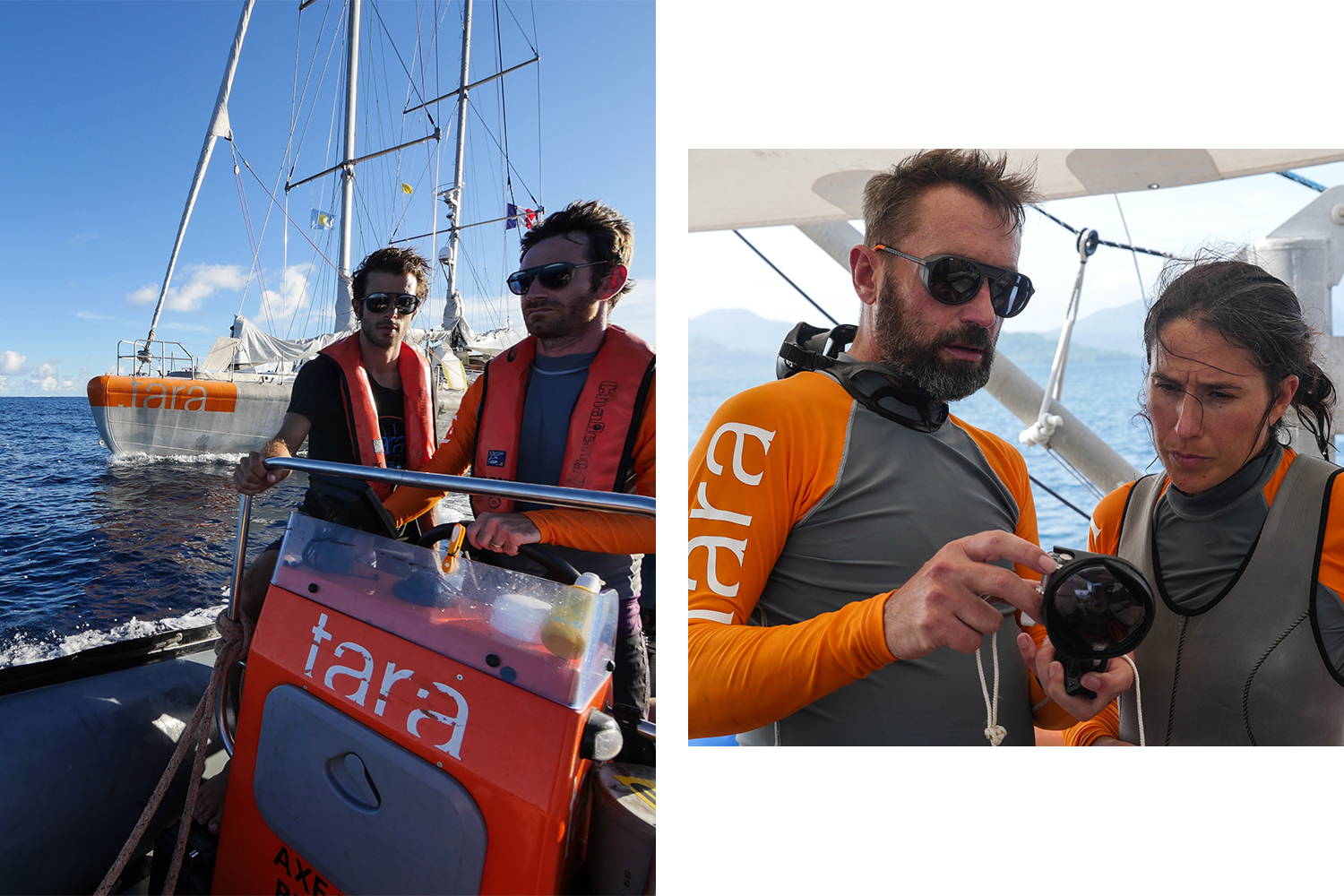 You are sailing on a mythical boat, can you tell us more about it?

This schooner looking like a ship of the future was born from the imagination of engineers and architects for French doctor-explorer Jean-Louis Étienne in 1989.

The original idea, for this boat named Antarctica, was to study the Antarctic polar areas. Then it became the Seamaster with the famous New Zealand navigator Sir Peter Blake. It is under the colors of the French designer Agnès b. And Étienne Bourgois that the sailboat was renamed TARA in 2003. Since then, he has devoted himself to the environment, to education and, now, to science.

TARA measures 36 meters long and 10 meters wide. It has 16 beds that can accommodate sailors and scientists on board. Scientists from several international laboratories regularly take turns according to their field of expertise, the area crossed and the nature of the studies.

The schooner is also equipped with a cabin dedicated to microscopy and computer science, a dry laboratory and a wet filtration laboratory on the bridge.

In addition to the sailors and scientists, the boat welcomes throughout the expedition a correspondent and an artist to question in an original and creative way our vision of the ocean. 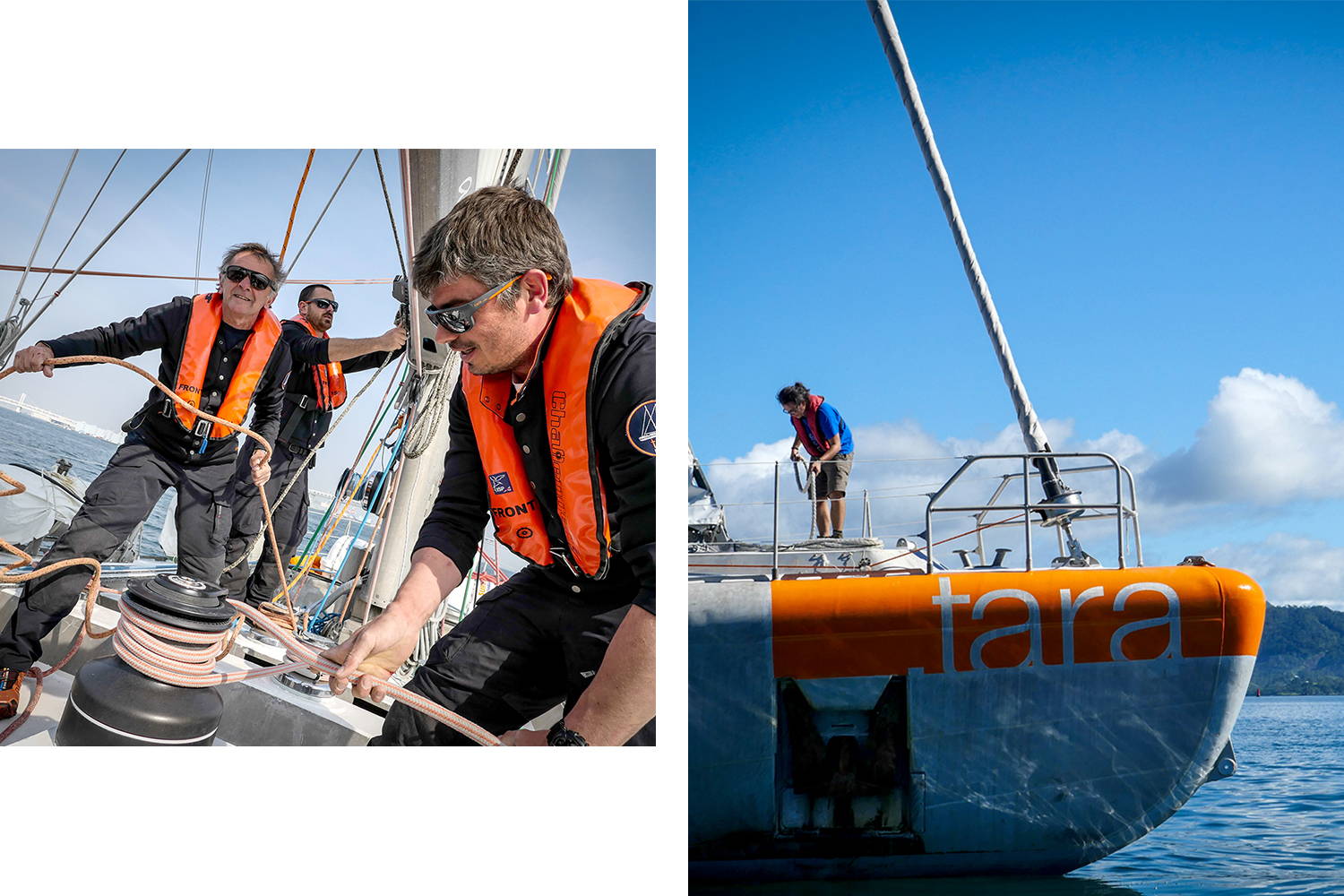 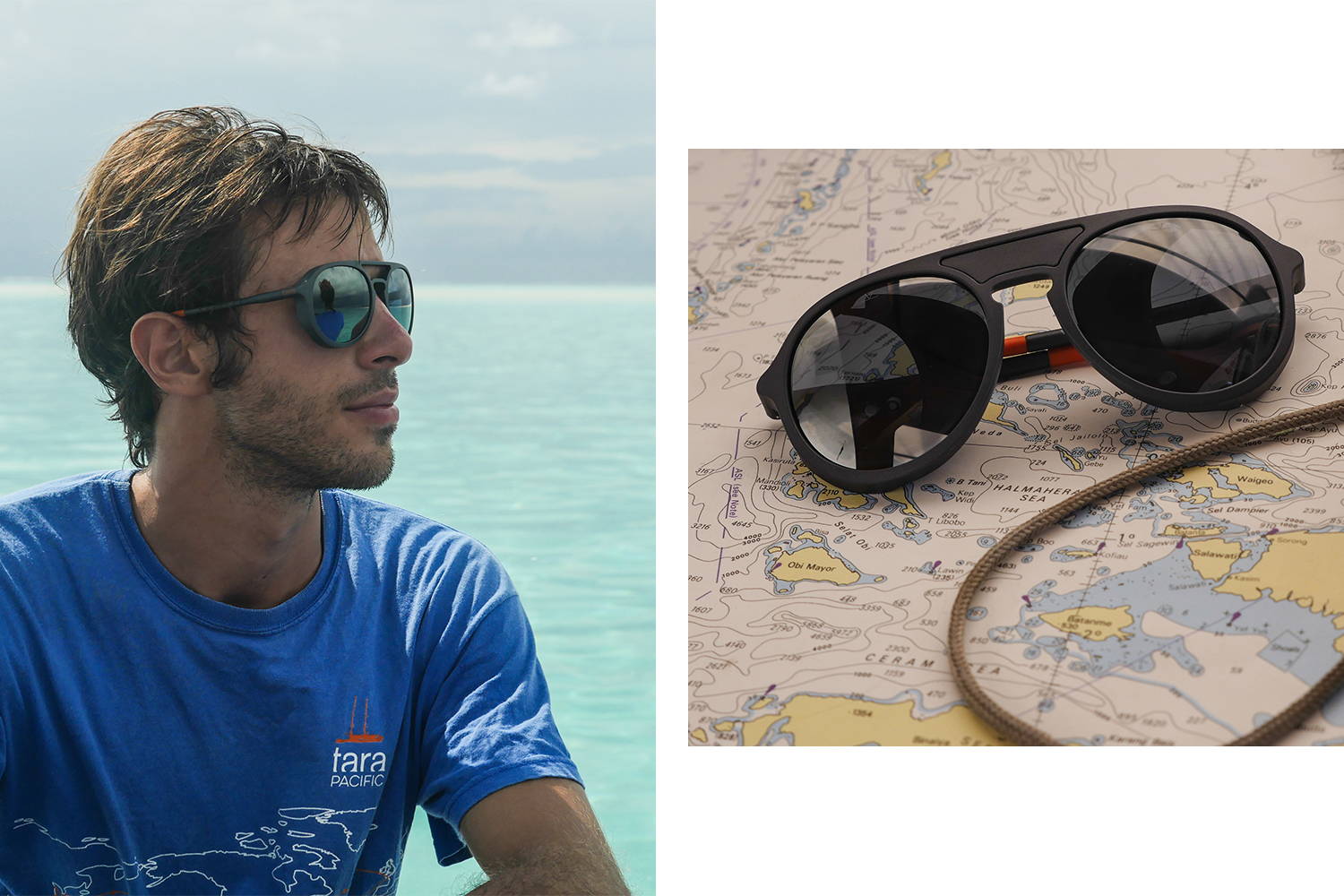 Where are they right now? And what are the next steps?

The boat is currently in China where it will make some samples but also stops and conferences in Hong Kong, Shanghai, Xiamen, and Keelung to raise awareness of the highest number of ocean issues in the 21st century. Stops are also planned in Japan in May and the United States (July-September) before the end of the mission in Lorient at the end of October. Tara will return to Paris at the end of this year where a series of events will be scheduled on this occasion.

Last question, what would be your vision of a Vuarnet Day?

My vision of a Vuarnet Day is a typical day where the Tara team is active on the deck, on and in the water under the Pacific sun to successfully conduct the day’s research.

Vuarnet has been an official supplier of the Tara Foundation since 2015 and is currently accompanying the schooner in the Pacific by providing high-quality models to the expedition’s crew and scientists. 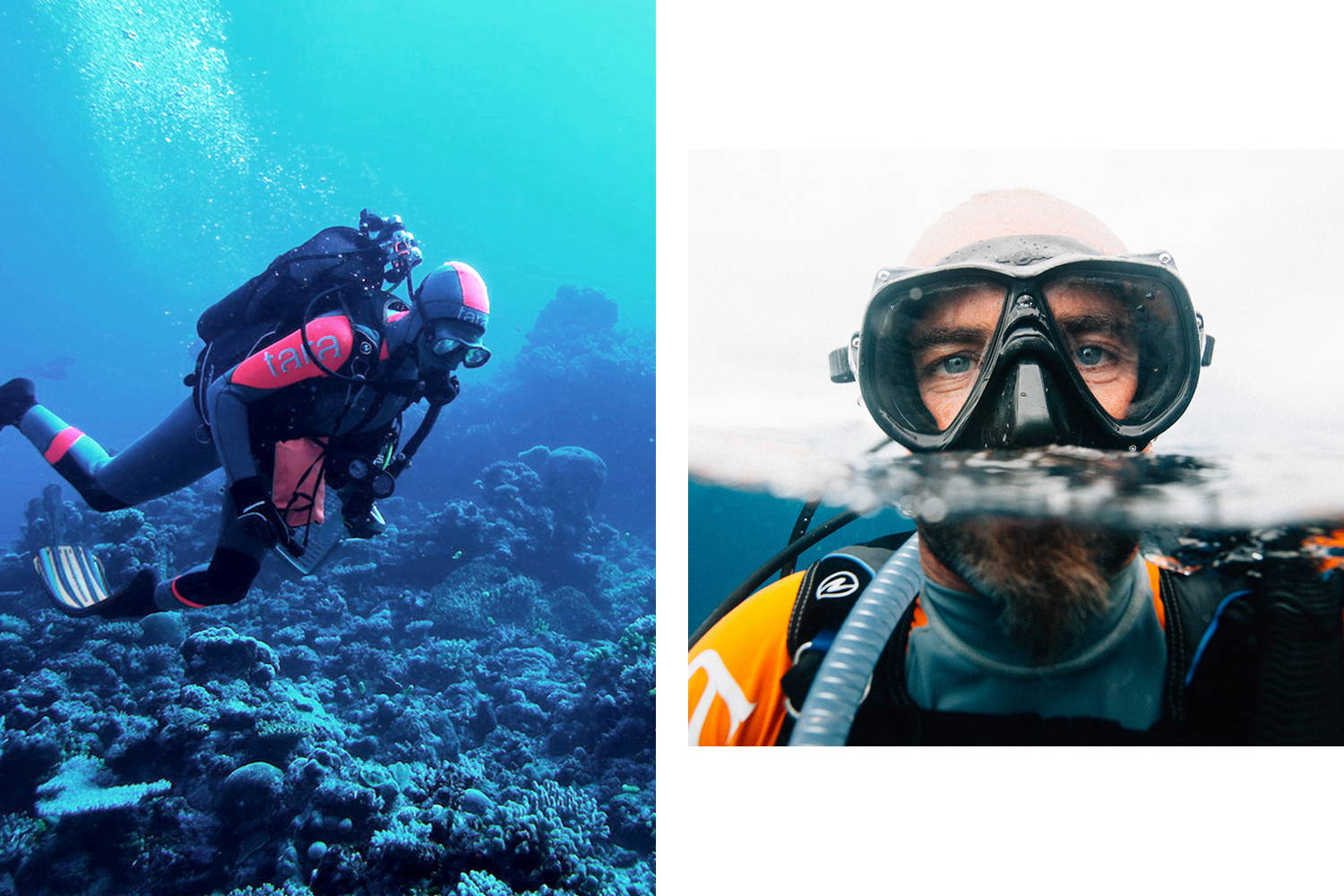